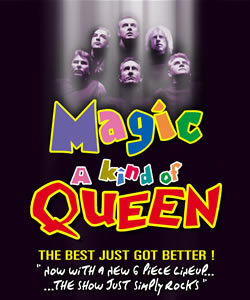 On 9th March 1974 ‘Seven Seas of Rhye’ reached No 10 in the UK pop charts, followed in October by ‘Killer Queen’ which went to No 2. The legend was born!
Hear & See Magic proudly performing the Music of Queen
Now with more energy, a bigger line-up
and a massive new sound.

The Best just got Better!

Keyboard player Dave Chapman has joined the band bringing with him a powerhouse of sounds with his hi-tech instruments and his fabulous keyboard playing skills.
Those of you who have been to Magic’s ELO concerts will be aware of Dave’s genius, not believing one person can produce all that sound – live!

If you’ve already been to a Magic Concert, then you’ll know. If you haven’t, do yourself a favour, come along, join their ever growing fans and enjoy Magic’s remarkable talents, bringing to you live Queen’s greatest hits as no other group can.

Magic A Kind of Queen – Tickets

Magic A Kind of Queen – Comments

Magic A Kind of Queen – media

One thought on Magic A Kind of Queen