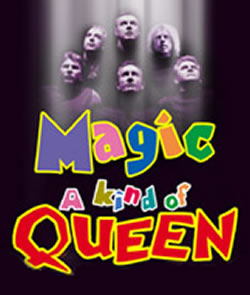 Magic were formed in 1974, just as Queen were reaching the height of their popularity.

As a harmony group performing covers of The Beach Boys, Four Seasons & ELO, Magic soon introduced the music of Freddie Mercury & Queen into their repertoire, performing Bohemian Rhapsody live in their stage show just as it reached No.1 in the U.K. charts.

Magic have built their reputation and following, performing material of great complexity both vocally and instrumentally to an incredibly high standard. This has given them huge success in Europe, America, Russia, the Gulf, and with the British Military in the Falklands, as well as in major Theatres the length and breadth of Gt. Britain.

Magic, during their career, continued to perform many Queen covers in their stage show, including Killer Queen, A Kind of Magic, and of course the anthem, Bohemian Rhapsody. Magic attracted more and more Queen fans to their shows and popular demand brought about an increase of Queen material into their stage performance.

Since 1993, Magic have dedicated a full concert to the music of Freddie Mercury and Queen. There is no attempt to emulate Queen visually in their concert, but rather to celebrate the music of one of the greatest bands of all time by performing it superbly, live, and better than anyone else, with the exception, perhaps, of the originals, Queen themselves!

Magic have augmented their usual five piece line up with the addition of Dave Chapman, a sensational keyboard player, who reproduces the complex orchestral sounds of the ELO repertoire.

Magic a kind of Queen – Tickets

Magic a kind of Queen – Comments

Magic a kind of Queen – media