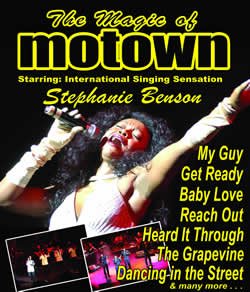 THE MAGIC OF MOTOWN
Reach Out – 40th Anniversary Tour

Come and enjoy spectacular new stage show The Magic of Motown as it embarks on a nationwide tour to celebrate 40 years of Tamla Motown number one hits in the UK.

Reach out. And you could be back in Detroit during Tamla Motown’s heyday with this non-stop musical extravaganza.

There’ll be dancing in the street – this classic stage show honours Tamla legends that brought the world to its dancing feet, including the Temptations, Diana Ross and the Supremes, the Four Tops, Marvin Gaye, Martha Reeves, Smokey Robinson, Mary Wells, Stevie Wonder and many, many more.

Get ready – to journey back to when the Four Tops hit the number one spot for Motown for the very first time with Reach Out I’ll Be There. Scores of classic hits are authentically recreated including Get Ready, Stop in the Name of Love; My Girl; Dancing in the Street; What Becomes of the Broken Hearted, Tears of a Clown, Ain’t Too Proud To Beg and many, many more.

Heard it through the grapevine – This show attracts glowing reviews thanks to tight vocal harmonies complemented by an eight-piece backing band. The Magic of Motown Band boasts an impeccable pedigree having performed with many of Tamla’s original superstars.

Baby Love. Whether you’re young, young at heart, or old enough to know better, this is a show for all those who just can’t help themselves. . . a stunning spectacular for all the family.

4 thoughts on Magic of Motown