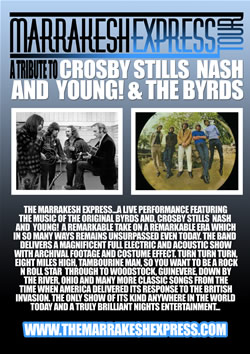 A tribute to CROSBY, STILLS, NASH & YOUNG plus THE BYRDS – The Marrakesh Express

The Marrakesh Express show comes to The Pavilion Theatre Glasgow on 11th April 2008.

The first half delivers a unique take on the cosmic folk-rock jangle of the original Byrds with songs like Eight Miles High, Mr Tambourine Man and Turn Turn Turn followed by an hour of musical and harmonic wonder performing the first two Crosby, Stills & Nash albums, culminating in a fantastic Neil Young inspired rocking climax. Not to be missed.