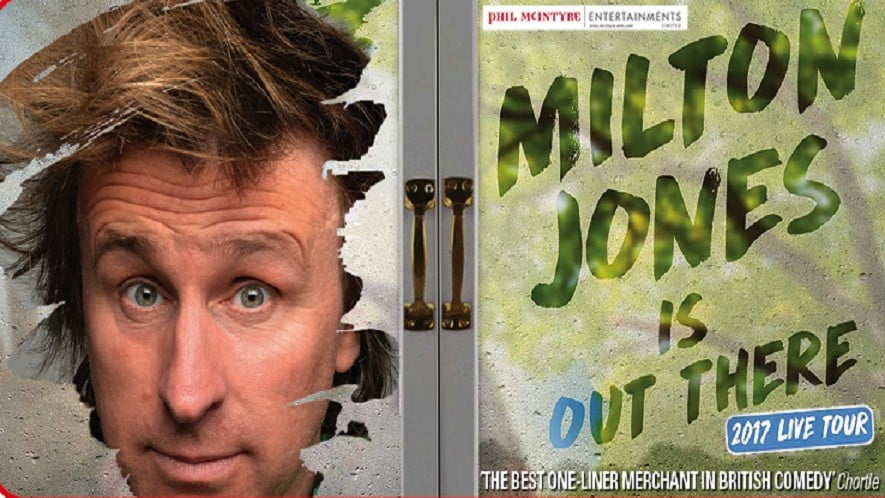 Milton Jones is Out There. No, really out there and this time he hasn’t just forgotten his keys. He’s holding up the mirror of truth to society, and he can see right through it, which means its probably just a window. In his brand new show he’ll be putting his foot down and lifting the lid on the pedal bin of lies of the media (which doesn’t include this press release obviously). He will also be scaling the heights of fashion at the risk of falling into a terrible cravat. Milton will be talking about his life so far – the ups, the downs and why buying his own see-saw was the best decision he ever made. But perhaps he should give all this up and seek the highest office in the land – but how do you get a desk and a swivel chair up a mountain? Oh and now he wants to be Prime Minister too. Can we do worse than the politicians we already have? Yes we can!

Milton Jones is Out There – Tickets

Milton Jones is Out There – Comments

Milton Jones is Out There – media

‘Beautiful one liners so skillfully sculpted, you don’t know whether to laugh or put them on your mantlepiece’.
****
Guardian

There’s a strain of mathematical nerdiness to all one-liner specialists, of course; the remorseless wordplay, the dismantling of linguistic certainties brick by brick, suggests an obsessive personality. But Milton Jones’s gags] are more algorithmic than most. By the end of an evening in his company, you’ll doubt there are any expressions in the English language that he couldn’t invert, subvert or mine for deeply buried dual meanings. It’s like a big dipper for the brain, as Jones flips a sense on its head and plunges us from everyday reality into another ridiculous contrivance or surpassingly odd mental picture.

It’s a major comic effect, particularly given how little Jones has to work for it onstage. His heavy lifting is done at the keyboard; live, he need hardly break sweat. That’s only a problem in his introductory 20 minutes, when he appears in half-baked disguise as his own granddad. This occasional alter ego has yet to develop into anything as satisfying as a character; he’s just a lower-energy, low-commitment version of Jones, with a few gags about the second world war thrown in. (“I wanted to join the Resistance,” he tells us. “But they were against it.”)

There are no other gimmicks tonight. It’s just pop-eyed, shock-haired Jones messing with the idea that there’s any stability to the things we say. There are corny gags and convoluted ones, including the blissful quip that begins: “If you Google ‘lost medieval servant boy’…” There are visual puns, like the one about sushi at Heathrow airport (“nice big portions, but it did taste a bit luggage-y”), and puns where the fun is trying to anticipate what Jones is about to do to any given figure of speech. “I’ve pulled out all the stops this evening…”, he begins, and the anticipation is as delightful as the eventual punchline. It’s silly stuff, and, at its best, sublime.

Milton Jones is Out There – COVID Information