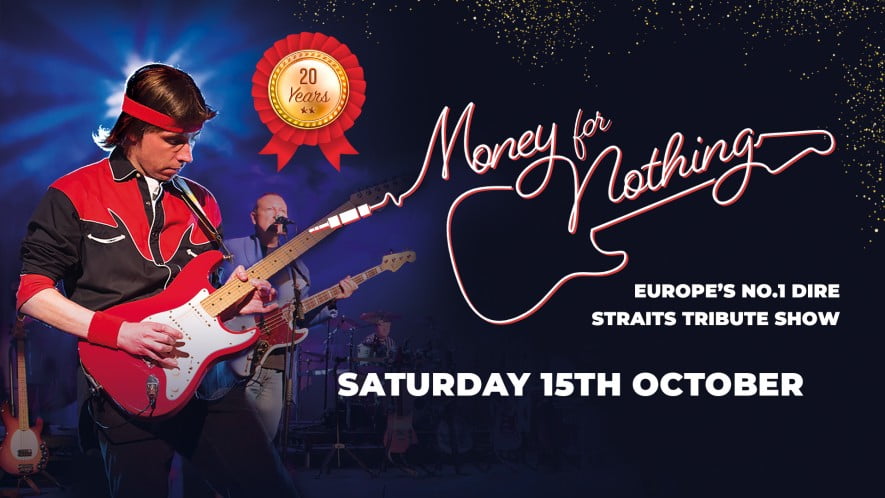 Unfortunately, with the ongoing global situation, and the increasingly unlikelihood of events being able to go ahead in the short term, we have had no alternative than to cancel the performances of Money For Nothing: A Tribute to Dire Straits, originally scheduled to take place from Thursday 15th October 2020.

If you purchased your tickets by card online or via telephone, then we will process this refund directly onto the card you used for the original purchase. Refunds will take up to 7 working days to appear in your account.

If you paid at the theatre in person via cash or card, our box office staff will contact you to arrange a suitable refund. Unfortunately, as we are working remotely, we cannot process cash refunds and can only offer, for original cash customers, a refund by cheque, bank transfer or direct refund onto a credit or debit card.

If you have any queries, please contact us, preferably by e-mail, on sales@paviliontheatre.co.uk (including your booking surname and postcode) or call our Box Office. Our staff are now working remotely to protect their own health and that of colleagues and customers therefore the theatre is not open to the public, but you can contact them on 0141 332 1846 (selecting option 1, 2 or 3), with opening hours of 10am till 3pm, Monday to Thursday.

We apologise for any upset or disappointment this will cause. We wish you well in these strange times, but we are hopeful that things will get back to normal soon and look forward to welcoming you back to the theatre soon.

‘Money for Nothing’ was formed in 2000 as a tribute to one of the world’s premier rock bands – Dire Straits. The abundant energy and the excellence and musicality of their performance makes Money for Nothing a “must see” for any rock enthusiast or Dire Straits fan.
Fronting the band is the brilliant guitarist and Mark Knopfler sound-alike Aled Williams. Behind him the line-up features top-class and experienced musicians that make this band a worthy tribute to Dire Straits. Aled and the entire band have studied Dire Straits in great depth to re-create their tribute to be as close as possible to the real thing. Not only ‘can the boy play’ but his voice is also what makes Money for Nothing so unique. You will also see an array of guitars like Mark would play. 2020 is their 20th Anniversary and set to be the biggest and best yet!
“Make no mistake…they are good…..VERY GOOD!” – The Observer
Featuring all the hits from their first ever single ‘Sultans of Swing’ to ‘Brothers in Arms‘, ‘Walk of Life’ and their last single released in 1992 ‘The Bug’ – also the legendary ‘Money For Nothing’ (ft Sting) which was the first ever video played on MTV. The band also include versions from ‘On the Night’, ‘Alchemy’ and ‘Live @ The BBC‘.
The ‘Money for Nothing’ stage show has been performed extensively all over Britain and also Spain, Portugal, UAE, and the Gulf, at all types of venues & events – from Theatres, music festivals and Live Music Venues. 2010 saw them headline the main night on Europe’s Biggest Tribute Festival. The band has also had the pleasure of performing as show opener for the legendary Roy Wood on part of his Christmas Theatre Tour. Sept 2011 saw them take their show to India to perform at a sell-out concert where they headlined an event held at one of Bangalore’s largest Amphitheatres. Their special appearance was featured in the world’s largest selling English-language daily newspaper, The Times of India. In January 2015 they also had a very successful tour of the UAE with performances in Bahrain and Dubai – which has lead to them being tipped as the worlds no.1. Plus, tours of Spain and Portugal in the countries most prestigious Theatres. They are taking the UK Theatre circuit by storm!
Dire Straits are one of the best bands to ever come out of the UK, they have sold in excess of 120 million albums worldwide and were the UK’s first stadium rock band. Their best selling album ‘Brothers in Arms’ was an international blockbuster selling over 30 million copies and becoming the fourth best selling album in UK chart history. ‘Brothers In Arms’ was also the first ever CD single, and the first ever album to sell over one million copies on CD. Dire Straits also won numerous awards including, three Brit Awards, four Grammys and two MTV Music Video Awards, and in 2009 they were awarded the Music Heritage Award. 2018 saw Dire Straits being inducted into the Rock’n’Roll Hall of Fame! (finally!).
“Money for Nothing – A ‘MUST SEE’ for any Guitar Fan & Guitar enthusiast”
NOT TO BE MISSED!

Money For Nothing: A Tribute to Dire Straits – Cancelled – Tickets

Money For Nothing: A Tribute to Dire Straits – Cancelled – Comments

Money For Nothing: A Tribute to Dire Straits – Cancelled – media

Money For Nothing: A Tribute to Dire Straits – Cancelled – COVID Information