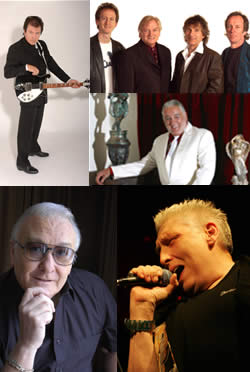 It’s said that if you remember the 60’s you weren’t there! Strange then that these 60’s artists are among the best remembered artists of all time. Who could forget hits such as ‘Somewhere’, ‘Marie’& ‘Hold Me’ from PJ Proby, ‘Out Of Time’ & ‘Handbags & Gladrags’ from Chris Farlowe, ‘Twist & Shout’, ‘Do You Love Me’ & ‘Candyman’ from Brian Poole, ‘Hitchin a Ride’, ‘Early in the Morning’ & ‘I Live For The Sun’ from Vanity Fare, and the unforgettable voice of Mike Pender from The Searchers on ‘Sweets For My Sweets’, ‘Needles & Pins’, and ‘Don’t Throw Your Love Away’. Surely, an evening to remember from the ORIGINAL stars of the 60’s.

The life of James Marcus Smith began on November 6th 1938 at Herman Hospital in Houston, Texas. As early as three years old, Jim recorded his first song, ‘Roll out the Barrels’, when his uncle Dan took him to a recording booth at the nearby fairground. However, he promised his parents that he would finish high school before pursuing his dream of fame and fortune. Jim graduated in 1957 and made his way to Hollywood.

Jim was signed up by one of the biggest agencies and he was named ‘Jett Powers’ as they thought that ‘Jim Smith’ was too ordinary. He then met up with a girl called Sharon Sheeley who had written a big hit for Ricky Nelson called ‘Poor Little Fool’. Sharon took him to Liberty Records where he was signed to a song writing and singing contract and she changed his name, yet again, to PJ Proby; after a boy she had dated in Junior High School. On that day, a first step to Worldwide fame was taken.

In 1961 Liberty released the first PJ Proby single ‘Try To Forget Her’ and he was also kept busy as a session singer for artists such as BB King, Johnny Cash, Little Richard and Elvis Presley. However, Jim’s burning desire was still to have a successful career as a solo artist. 1n 1962, Liberty released the Sharon Sheeley/ Jackie de Shannon composed number ‘The Other Side Of Town’, but Jim didn’t feel that the Company were totally behind him on the promotion side of things.

PJ was introduced to the talented and charismatic producer Jack Good who, at the time, was working alongside Brian Epstein to produce the first TV special of ‘The Beatles’. Brian and the ‘boys’ were impressed with PJ’s demo tapes and he was included in the show. That breakthrough led to Proby’s arrangement of the old 1939 Dick Hayames ballad ‘Hold Me’ which turned into an up tempo rocker, reaching the number three spot in the British Charts. This success was followed by another transformed oldie from the same period titled ‘Together’, which reached number eight in the charts.

PJ was known for his exhausting visional stage performances and it was during one of these that he ‘famously’ burst out of his velvet trousers. For this, Jim was banned from all theatres in Great Britain plus BBC and ATV television stations, although he was headline news in almost every newspaper. As a counter attach, Liberty released a single entitled ‘I Apologise’ which, despite no promotion or personal appearances, reached number eleven in the charts.

In 1965 he once again proved to his loyal fans that the ‘magic’ was never to leave him and his recordings of ‘Maria’ from ‘West Side Story’ was regarded, along with ‘Somewhere’, as two of the best and most exciting versions ever and are still of the two most requested songs.

To say PJ Proby is talented is an under statement. With his musical and stage career he has made an indelible impression on the music and entertainment industry and is still one of the most exciting and talented performers of our time.

Chris Farlowe needs no introduction, his classic 1966 number one hit ‘Out Of Time’, written for him by Mick Jagger and Keith Richards, is still high on radio play lists.

The same can also be said for his 1967 hit ‘Handbags & Gladrags’, written by his good friend Mike d’Abo. Chris was the first artist to successfully record this song, which was subsequently a hit for Rod Stewart and then, much later,
the Stereophonics, but Chris gave it his own inimitable stamp.

His first band was the John Henry Skiffle Group; this eventually became Chris Farlowe And The Thunderbirds, deriving his name from guitarist Tal Farlow and his love for the American Thunderbird car. This early band featured future rock giants Dave Greenslade, Carl Palmer and Albert Lee.

At the end of the sixties Chris joined forces with Paul Buckmaster to form The Hill and, after this project folded, Dave Greenslade invited him to join Colosseum for whom he was to record two albums before the band split. He was immediately asked to join Atomic Rooster by the late Vincent Crane where he was once again united with Carl Palmer. This was not to be a happy liaison for Chris although he did record two albums with them.

In 1975 Chris formed a new Thunderbirds, again with Albert Lee, to do a UK tour, before making the decision to retire from the business for a while. A chance meeting with Mike Vernon reversed this decision and Chris produced two albums in 1985 and 1986. Chris has since toured the UK, Germany and Spain with his own band as well as performing with Pete York and, Deep Purple’s members, Jon Lord and Ian Paice, as well as a highly successful UK tour with ex Stone The Crows vocalist Maggie Bell.

In 1995 Chris embarked on a major European tour with the reformed Colosseum and it was like the band had never been away. Chris and his band, featuring Norman Beaker, John Price, Dave Baldwin and Paul Burgess undertook a 35-date tour of Europe at the end of 1998. Despite breaking a leg and two ribs during the early stages, Chris soldiered on in the time-honoured tradition of the ‘show must go on’, to complete the highly successful tour.

At the end of 1999, Chris played a forty-date theatre tour of the UK with The Manfreds, Colin Blunstone and Alan Price. Such a success was this liaison that Chris became a firm favourite ‘Manfreds’ guest and he joined them on their Maximum Rhythm ‘n’ Blues tour again in 2000, 2002 & 2006. Chris also played a number of dates supporting Van Morrison, also joining Van on stage to sing a few duets.

Chris toured extensively in 2006 to celebrate his 50 years in the music business and his renewed enthusiasm prompted him to agree to another UK tour in 2008, this time as part of ‘Oh Boy! It’s The Non Stop Sixties’.

Throughout the history of popular music, and never more so than the swinging sixties, the charts have been dominated by groups. These hit making combos inevitably produce a front man. A person with a distinctive vocal style that became the groups signature.
1963 saw the arrival of one such 60’s group and one of the most talented and captivating front men to emerge from that era. The man was Mike Pender and the group was The Searchers. Their first recording ‘Sweets For My Sweet’ in 1963 was the first of three Number 1 hits and just one of 14 amazing and memorable chart hits that followed.
The Searchers became a household name on both sides of the Atlantic and the sound that is now legendary is down to the highly distinctive and unmistakable vocals and jangly twelve-string guitar of one, Mike Pender.
Mike Pender is not just a Legend to his fans, but more like a personal friend and relishes in meeting and talking to his devotees, so sit back and enjoy and immerse yourself in that feel good factor known as the swinging 60’s courtesy of the one and only Mike Pender.

In his career with The Tremeloes, which lasted 14 years, Brian Poole completed three world tours and many national tours on stage, recording studios and in films, featuring a host of stars of these professions.
Brian started his career as a studio-backing vocalist and often imparts a wealth of amusing and even controversial stories about the 60’s era and its stars.
Brian was born in 1941 in the East End of London and is a true cockney, with a family who were in the hard working world of the famous London Markets. This fact led him to write a book with the title ‘Talk Back’- which is a complete guide to British Colloquialism or Slang.
In the Tremeloes years Brian notched up 11 top ten hits. The biggest being the smash number 1 hit ‘Do You Love Me’. His first major tour was with the then unknown Beatles and during his time with Decca Records he was one of the top British acts for many years.
Brian has been married for 33 years and his daughters are the famous singer/songwriters Alisha’s Attic who bring him up to date on the current music scene as often as possible.
Enjoy the talent and wit of the one and only Brian Poole.

A great British pop harmony group whose International hits ‘Hitchin’ a Ride’ and ‘Early in the Morning’ both sold over a million copies each worldwide and earned them two gold discs.

It all started in 1968 when their debut single ‘I Live for the Sun’ climbed to number 20 in the British charts and, at the same time, reaching number 5 in the Australian top ten. Their follow up single ‘Summer Morning’ bubbled under in Britain but became a small hit in the USA.

It was their fourth and fifth singles that finally saw them make their International break-through. ‘Hitchin A Ride’ became a smash hit on both sides of the Atlantic, earning them their second gold disc. It followed the success of ‘Early in the Morning’, which, six months previously, had reached the top ten in both the UK and USA, earning them their first gold disc.

Their success has led them to tour extensively in many countries around the world, including Australia, Europe, Scandinavia, the Middle East, and of course USA where ‘Hitchin A Ride’ was adopted as a cult song by many of the West Coast DJ’s and helped create the ‘Hitch-Hike’ dance craze.

The bands current stage show reflects their 40-year history and, for a band whose career spans so many years, they can still boast having three members who have worked together for more than three decades. Their superb musicianship and harmonies will be showcased throughout the ‘Oh Boy! It’s Non Stop Sixties’ show.

One thought on Non Stop 60's