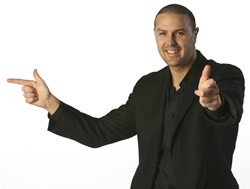 This performance is to be filmed for DVD!

Recommended over 16’s only

In August 2008 Paddy hits the road again with his eagerly awaited brand new show ‘Paddy McGuinness Plus You’. The new show will have the "plus you" element. Specially invited guests from your area will be hand-picked by Paddy himself to be his new support act! All this plus a winner’s cheque for two thousand pounds and a chance to appear in his new live DVD. The competitions will run on Paddy’s website www.patrickmcguinness.co.uk and in the local press.

Paddy’s last tour ‘The Dark Side’ was the fastest selling of 2006, taking in 115 sold out dates and selling more than 160,000 tickets! His following live debut DVD entered the comedy charts at No 1 and has currently sold in excess of 250,000 copies.

Patrick McGuinness’s first outing on the road to tellydom was in a series of 6 one off episodes in C4’s ‘The Comedy Lab’. He appeared as Terry, a work-shy employee in Peter Kay’s ‘The Services’. Soon after this he got the part that he made his own as Paddy the doorman in ‘That Peter Kay Thing’. He appeared in the episode entitled "The Club" which led to the massive spin off series ‘Phoenix Nights’. Not taking acting, writing or comedy too seriously Paddy returned to his job as a fitness instructor after the first series of ‘Phoenix Nights’. It was only when his life-long friend Peter Kay persuaded him to leave his full time job and give showbiz a go, that Paddy left the fitness industry behind and started work on ‘Phoenix Nights’ series 2.

Patrick then went on to co-write with Peter Kay, the eagerly anticipated spin off to Phoenix Nights: ‘Max and Paddy’s The Road To Nowhere’. This follows the adventures of the two Phoenix doormen (Max and Paddy) and what they get up to on their travels around the country. ‘Max and Paddy’s Power of Two’, which featured the 2 characters performing in their very own work out video was subsequently released on DVD and became the fastest selling fitness video ever!

Paddy’s cap has numerous feathers and in 2006 he proved this by hosting and writing ‘Inside Wayne Rooney’ for Sky One. He also presented the weekly Friday night show ‘Unanimous: The Fallout’ with Olivia Lee for C4, guest presented the Paul O’Grady Show and also found time to write a comedy short for E4, ‘The Unknown Stuntman’.

In 2007, Paddy presented ‘Raiders of the Lost Archive’ on ITV1; a show in which he and his guests (including Bruce Forsyth, Chris Tarrant, Michael Parkinson and Ronnie Corbett) discovered TV shows they had appeared in years ago, which they had previously thought were lost. As well as appearing on numerous comedy shows including ‘Eight Out of Ten Cats’, ‘Law of the playground’etc, Paddy’s new football DVD, ‘Paddy McGuinness: All-Star Balls Ups!’ entered the sporting DVD chart at No 1.
In 2008 Paddy will be appearing in the new Leigh Francis comedy for ITV ‘Keith Lemons Gap Year’ and he is also the face of Greggs new television campaign.

Paddy McGuinness Plus You Live! – Tickets

Paddy McGuinness Plus You Live! – Comments

Paddy McGuinness Plus You Live! – media

2 thoughts on Paddy McGuinness Plus You Live!