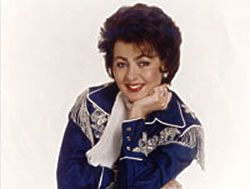 This year marks the 42nd Anniversary of the tragic and untimely death of one of the world’s greatest singers Patsy Cline.
For more than a decade "Ireland’s International Lady of Song" Sandy Kelly has trilled audiences the length and breath of Britain and Ireland and beyond with her "crystal clear" interpretation of some of the greatest songs ever recorded. Timeless hits like " Sweet Dreams", I Fall To Pieces", " Crazy" " She’s Got You".

What more can be said about Sandy Kelly? One of the greatest entertainers that Ireland has ever produced, Sandy’s links with Patsy Cline began back in 1989 when she recorded ‘Crazy’. The record was an instant hit and the public demand for Patsy Cline songs, at Sandy’s live shows, was so great that she decided to put together a "one-woman" tribute to Patsy. The tribute was such a success that it in turn led to London promoter Mervyn Conn producing a glittering ‘West End’ musical based on Patsy’s life, which of course starred Sandy Kelly. Sandy’s press reviews speak for themselves but in the words of George Hamilton IV, ‘ Sandy is Patsy. She has the sprit, strength, power and fire and above all the voice that made Patsy the greatest country legend of them all’. Strong words but a true testimony to Sandy’s portrayal of Pasty has been the captive audiences. Night after night standing ovations and several encores prove that Sandy can somehow capture the Magic of Patsy Cline.

Sandy is joined on this "Concert Tribute" by some of Irelands finest musicians and singers and right from the start the audience are sure to be on the edge of their seats and indeed have been known to dance in the aisles.

"Patsy Cline Music and Memories" returns to Britain for this very special "42nd Anniversary Tour" for a limited number of dates during September and October. Truly, this "Show" is a must, for not only Country Music fans, but also lover of "Good Music" everywhere. Definitely a Show not to be missed!