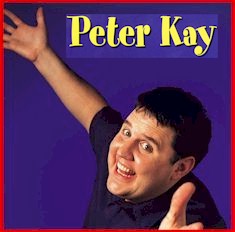 His critically acclaimed 1999 tour of the North West was a sell-out success and the subsequent video release Peter Kay Live At The Top Of The Tower(Vision Video), became a best-seller.

Peter’s unique brand of stand-up has attracted a massive following and won him a prestigious Perrier Award nomination and a British Comedy Award.

What the Press Said…

“A brilliant stand-up comedian.”
The Times

“Showbusiness will never be the same again!”
Heat