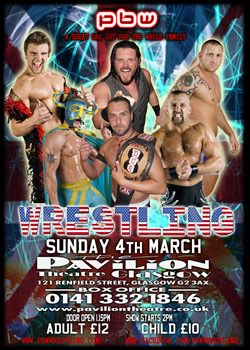 Premier British Wrestling are delighted to announce a new working relationship with the Pavilion Theatre in Glasgow that will see us make our city centre debut Sunday 4th March 2012.

PBW is the UK's leading wrestling promotion who specialise in American style wrestling events as seen on TV using the very best European talent including Scotland's own BT Gunn, Lionheart, Jack Jester plus many more. Our debut in the Pavilion will also see some of the biggest and baddest wrestlers from England arrive in Glasgow to challenge the PBW regulars. As if that wasnt all exciting enough masked Mexican wrestling sensation El Ligero will return to Scotland in March to thrill our great fans with his high flying aerial moves. PBW owner Ross Watson from Maryhill in Glasgow has promised that the companies debut in the Pavilion will be one of the most anticipated shows of the year.

A great day out for the whole family and one that is just not to be missed. See you all ringside.