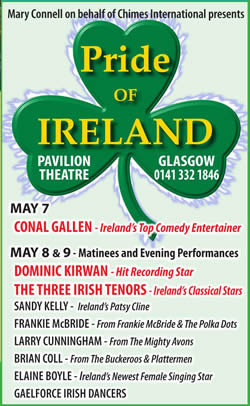 Conal Gallen’s philosophy has always been to try and get as many jokes as possible into every show. And, boy, does he succeed here! Packed from start to finish with absolutely hilarious stories and songs, this man (who has been described as a legend in his own trousers!) tears the house apart, brings the roof down, makes the rafters roar and cures more people than the Health Service. Whatever it is, not only has he got it, he’s FULL OF IT!

Hailing from County Donegal, Conal Gallen has been described as the greatest Ambassador of Irish Humour to date. From his first appearance in 1987 Conal has travelled the world performing his shows as far a field as Memphis, Nashville and Australia. His particular brand of Irish humour not only appealing to the Irish abroad but finding a new audience in the local population wherever he appears.

‘Sell out Tours’ are the norm for Conal wherever he performs with extra dates often having to be added to cope with the demand for tickets. When asked why he thinks his shows are such a success abroad Conal says ‘the Irish are a unique race of people, we have no problem laughing at ourselves and people the world over would prefer to laugh with someone than laugh at them’. Conal’s shows have been described as a two hour marathon of jokes, humorous songs and sketches with a definite Irish flavour and gallons of laughs.

Conal’s latest venture sees the launch of his latest DVD & CD which contains the hilarious songs ‘Anna From Buncrana’, ‘Where did all the Folk n Ballad Singers Go’ and ‘Horse It Into Ya Cynthia’. This song was composed by Conal himself, following a chance remark he heard just before a show one night. ‘I was due to go on stage in the Royal Theatre in Castlebar, when a lady in our company asked one of her friends to finish her drink quickly. She actually said ‘Bate it into ya, Cynthia’. I got home the next morning at 2.30 a.m. and wrote this song" says Conal. All threesongs feature on Conal’s new DVD & CD ‘Live! & Full of It’ which gives us a taste of the humour that, after 20 years and numerous industry awards, has secured him a position at the top of the ‘Most wanted list’ of Irish comedians.

This wonderful show from Ireland features the very best in Irish entertainment, from Yesteryear to today’s "IRISH STARS".
Starring Ireland’s most dynamic and versatile performer DOMINIC KIRWAN, with the Internationally renowned THE THREE IRISH TENORS, who will enthral you with their fabulous repertoire of popular Classics.
The stunning cast also includes SANDY KELLY, Ireland’s Patsy Cline.
From the Showband era, FRANKIE McBRIDE from Frankie McBride and The Polka Dots, LARRY CUNNINGHAM from The Mighty Avons, BRIAN COLL from The Plattermen and Buckaroos. ELAINE BOYLE, Ireland’s newest singing sensation, and featuring from the world of Irish Dancing, Internationally acclaimed Dancers from GAELFORCE-IRISH DANCE SHOW.

THE BEST THAT IRELAND OFFERS!!! A SHOW NOT TO BE MISSED

One thought on Pride Of Ireland