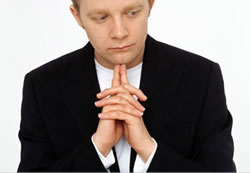 Derek Ogilvie is one of Europe’s best-known and respected mediums. This is Derek’s fifth visit to the Pavilion Theatre.

Derek’s UK TV appearances include Most Haunted, This Morning, LK Today as well as Richard and Judy and various other psychic programmes on Living TV. His Channel Five series The Baby Mind Reader was a big hit both here in the UK and throughout Europe. Derek is the first psychic in the UK to have their own terrestrial television show.

Derek’s work has taken him all around the World. This year he’s been filming a great deal in Holland where his series Derek Ogilvie -The Ghost Whisperer was a big hit for the Dutch broadcaster RTL.

Derek has also been filming in the USA and has appeared on such shows as NBC’s The Today Show and FOX NEWS.

“I’m still amazed by the fact that I am been able to help those who wish to communicate with their loved ones who have passed away. I am very conscious that my work is important and that I have to use it wisely,” says Derek. “I fully realise though that not everyone who comes along to one of my shows will get a reading. I’ve always been aware of the fact that I have to also entertain the audience that I have in front of me. It’s about getting the balance right.”

Derek loves performing on stage with his sometimes hilarious yet informative show. “I’ve had wonderful experiences on stage, over the years,” says Derek. “I have been able to reunite many audience members with their loved ones in the spirit world which can be an amazing feeling for everyone concerned. On these special occasions many people have been able to communicate with their loved ones for the first time in their lives.”