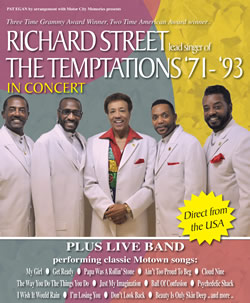 Born and raised in the Motor City of Detroit, Richard Street began his musical career at the tender age of 12 playing piano and singing with his mother’s encouragement and support. Since then he has been a professional entertainer for 47 years.

In 1955, Richard, along with his cousin and best friend, Melvin Franklin (later to become The Temptations’ legendary bass singer) were invited to join a vocal group: Otis William and The Distants. This led to Richard recording with the Monitors who were signed to Motown, and with whom he sung many outstanding lead vocals.

He also coached a 3-girl group, which consisted of Florence Ballard, Mary Wilson and Diane Ross. Under his guidance, he helped the girl group and many other musical groups prepare themselves for recording contracts with Motown – known as Hitsville, USA. Years later, the world came to know Florence, Mary and Diane as the famous Supremes. This valuable experience formed the foundation of his vocal coaching, and skilled choreography.

As a result of his knowledge of the music industry in those early days, for many years Richard held a coveted position in Motown’s Quality Control Department and was responsible for listening to talent being considered by the company. Also, which recordings were selected for release and submission for radio air play along with numerous other responsibilities in that department.

Well known as an incredible vocalist, in the early days of Motown Richard lent his tenor to sweeten vocal tracks on many recordings, but stayed away from the public eye. This placed him in the unique setting of being the voice behind many of the leads in The Temptations; although, although not yet a member of the group. He was on the microphone in the wings as the vocalists on stage lip-synched to his vocals, frequently receiving a standing ovation for his work.

In 1971, through the orchestration of God’s hand, Richard assumed his rightful place with The Temptations as a full time member. The group undertook a notable shift in direction and within a few years The Temptations were tracking topical subjects such as the Vietnam War and urban poverty. Richard delighted television, stage, radio and record-buying audiences with his leads on songs like “Heavenly”, “The First Time Ever I Saw Your Face”, “Firefly”, “Hey Girl”, “Masterpiece”, “Every Time I Close My Eyes”, “I’ll Keep My Light In My Window”, “Super Star”, “Show Me Your Love”, “Bare Back”, “Standing On the Top”, “Love Comes At Christmas”, from the Christmas album “Everything for Christmas”, “Papa Was a Rolling Stone”, and many more. Among the awards Richard has received are three Grammy Awards, two American Music Awards, and an NAACP Award. He was also there when The Temptations were inducted into the Rock and Roll Hall of Fame in 1989.

For over 22 years as a member of The Temptations Richard performed hundreds of shows and along with other members past and present, they visited over 40 countries worldwide. A lot of worthwhile experience gained from living in the music business has given him the opportunity to reflect on his unique career in his upcoming book “Ball of Confusion”, in which Richard chronicles his years with the group. Richard also continues to perform in his own show that includes the legendary music of the Temptations along with other classic hit songs that document the golden years.

Now, with all but one of the original members of the original Temptations having passed on, Richard presents the music of The Temptations in its original 5 man group format with a group lineup consisting of Lawrence Jones (originally from Detroit now resident in Las Vegas), together with current Detroit native, bass singer Eddie Watkins, Larry Johnson (also from Detroit) together with Chicago native Bob Henley 111 (formerly with Smokey Robinson). Presenting all of The Temptations best-loved hits, Richard Street and his group are a “must see” musical journey in time … the way it used to be!