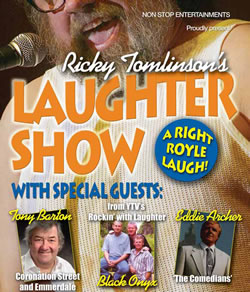 Ricky Tomlinson, hosts as his character Jim Royle (BBC TV’s Royle Family) and closes, with a 25 – minute routine, his very own laughter show consisting of over two hours of ‘side splitting’ comedy!

With Ricky on the show will be Tony Barton (Coronation Street & Emmerdale), Eddie Archer (The Comedians) and the comedy show band, Black Onyx (Rock with Laughter).

This is a night of comedy with a ‘Capital C’…..something in these gloomy times not to be missed.

Tony grew up in Beverley Yorkshire, during his teens he joined various ‘Pop’ groups whilst serving his apprenticeship as a Carpenter, also at weekends he went flying gliders reaching instructor level then gaining Pilots licence, but show business called and after serving his apprenticeship in the building trade went full time professional as part of a double act called ‘The Barton Brothers’ we were very successful touring with the big names of the 60s, (Everley Bros, Roy Orbison, Tom Jones etc)
We appeared on the TV talent show Opportunity Knocks, and came second, I then moved to London to work as a Solo artiste doing Comedy & Vocals, getting singing lessons from Barbara Andrews, (Julies Mum) and drama lessons at Wendy Wisbeys speech & drama in Chiswick, started doing TV drama like, Grange Hill, Minder and others, also TV & Radio Ads, (Olympus trip with David Bailey)
Whilst in the evening doing Variety shows in the Pubs & Clubs of London with (then unknown) names like; Jim Davidson, Mike Reid, Michael Barrymore
In 1982 Tony was cast as the lead in a then new BEER advert, this un be-known to him was to be the longest running campaign for beer of the time, running for 10 years all filmed on location around the world in places like Egypt, Acapulco, Kenya and the Rockies, winning awards for best performance in a commercial and funniest script.
1983 was a memorable year for Tony while visiting his Son in Guernsey he one day went for a drink and in the pub was OLLIE REED doing hand stands on the bar, I bet you can’t do it with one hand? Tony said Ollie obliged, Tony paid the bet, (a case of Groulch Lager) Ollie only dealt in cases whether they be beer, champagne or his favourite drink Blue Vodka. Tony & Ollie remained good friends right up to Ollie’s death in 1999; Tony will keep you amused for hours with his REED stories.
In 1986 Tony co starred in his own TV series, a sketch show of 6 half hour shows for Thames TV, appearances on many other top drama & variety shows and Panto followed, like through the keyhole, where Tony hired a furnished house for the day and pretended he lived there for the filming, (Imagine the owner watching the show and those famous words are said “who lives in a house like this”? and the owner shouts at the TV I do!!
During the 1990s Tony appeared in every major TV show including, Emmerdale, Coronation Street, Heartbeat and Cracker. The years 2000 and on led to more Coronation Street and TV Drama, he even played CHARLIE DIMMOCK in Hollyoaks and an alcoholic in Two Pints Lager. In 2007 Tony appeared on the new series of Last of the Summer Wine and a new BBC2 series called BACK IN BUSINESS and won the one job on offer on the show that being a year’s contract appearing in all the JONGLERS comedy clubs. Tony enjoys being a member of the Grand Order of Water Rats raising money for various charities round the world.
T.V credits Include;
Coronation Street (Pat the Builder) Hollyoaks, Linda Green, Emmerdale, Cracker, Heartbeat
Open All Hours, Last of the Summer Wine, the Stones Bitter Adverts, Two Pints Lager
The New Joseph Trailer BBC 1 (Dream On)

COMEDY show groups may come and go but BLACK ONYX look set to continue to dominate the entertainment scene for many years to come.

Being one of the very few groups of their kind to retain the original lineup after 26 years, the chemistry between these three talented guys ensures that every performance is as electrifying as the last, and guarantees the kind of ovation that has kept them constantly at the top.

Since forming in 1974, BLACK ONYX has worked tirelessly to perfect their trade via the network of summer season & cabaret.

They have become known to millions of theatergoers as bill toppers in this country’s major holiday resorts.

They also starred in the first ever summer review to be staged at what was then Britain’s top nightspot ‘BLAZERS’ at Royal Windsor.

It is apparent as soon as BLACK ONYX takes the stage that they enjoy their work immensely, largely due to the fact that they are good friends both on and off stage.

The breath taking speed at which the act is performed is quite spectacular, they manage to fit in everything from hilarious impressions to barbershop harmony, superb musical content and of course many now famous pieces that have become their trademark including Apache Dance and the Candle routine, throw in tributes to Cher, Shirley Bassey, Freddy Mercury, Tina Turner and a show stopping take off of ‘RIVERDANCE’ and you have all the ingredients of a never to be forgotten night out.

It is any wonder they were honored with the ‘CLUB MIRROR’ award for ‘Comedy act of the Year’ an amazing 6 times.