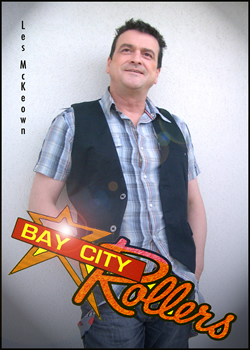 An Evening with Les McKeown
And the
Legendary Bay City Rollers


Take a trip back in time to a world of the 1970's biggest pop sensation!

With over 300 million albums sold worldwide, Les McKeown, was the original voice on every Bay City Rollers hit song. He had five years of unprecedented success dominating the pop music charts across the globe, with Number 1 hit singles in over 40 countries and the band filling the biggest stadia wherever they went. ‘Rollermania' had overtaken ‘Beatlemania', the first time any UK group had come close to the Fab 4.

In this brand new production Les McKeown performs some of the songs that influenced him whilst growing up and recollects first hand about those heady, crazy days of pop superstardom.

The show is topped off with the big hits of the Bay City Rollers including ‘Shang A Lang', ‘Summer Love Sensation', ‘Remember', ‘All Of Me Loves All Of You' and the biggest selling song of 1975 ‘Bye Bye Baby'.

‘Rollermania' is back – don't miss it