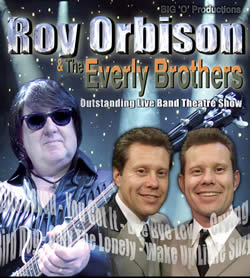 Blue Bayou Roy Orbison the legend features the unforgetable music of one of Rocks most magnificent, Roy Orbison. This is the big O – the way it was, a fully Musical journey through time, in sound and vision tracing the Music, Atmosphere and rise to prominence of a man that became a legend.

The Show is delighting audiences all over the UK and Europe This Show will have you dancing singing and you will be amazed at the accuracy to detail this Show gives you. This fast moving spectacular show also features The UK NUMBER 1 Everley Brothers Tribute Two of a Kind with authentic costume changes throughout it has gained the reputation as being UKs NUMBER 1 Orbison show from the press & Theatres alike.

“This show has The Wow Factor, The Big O is Back”
Phill Wood, BBC Radio

The Show is getting wonderful reviews wherever it goes.