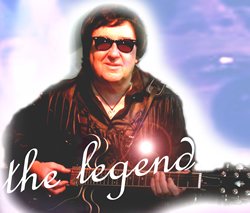 "My parents took me to see him in Blackpool when I was a child, I never forgot the performance. Roy Orbison had a most incredible influence on my life. It was the songs, that incredible voice, the man himself."

It was an experience that has stayed in Alan’s memory ever since; "I wanted to look and sound like ‘The Big O’, I listened to Roy’s music over and over, Roy taught me to sing."

In 2004 Alan put together the Blue Bayou show and took off after its sell out performance to rescue the dilapidated Hyde Theatre Royal (Greater Manchester) from closure. This caught media attention, and the battle to save the theatre was hi-lighted in The Stage newspaper, and on BBC Radio.

Following that success Alan was approached by promoters and Theatres to tour and the show, went from strength to strength, nationwide and abroad, inspired by the reactions of Orbison fans who travelled miles and distances to witness the show first hand.

Touring is nothing new to Alan Morris, He’d travelled all over the UK and Europe with top sixties band The Casuals who had a top ten hit with ‘Jesamine’, Other credits to Alan Morris is that he as worked in many TV shows such as Coronation Street, The Grand, Children’s Television, and many TV adverts.

Blue Bayou features music of Roy Orbison. This fast moving sixties show also features memorable music of The Everly Brothers, Dusty Springfield, Patsy Cline & Bobby Vee. The show has a five piece band & authentic costume changes throughout. This show has gained the reputation as being the UK number one Orbison show from the press & Theatres alike.

"Not only a show but a virtual time travel" – Liverpool Neptune Theatre
"The Voice, The Look The Performance Pure Brilliance" – Stockport Plaza Theatre
"This show has The Wow Factor … The Big O is Back" – BBC Radio