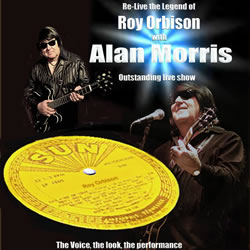 This Show will give you the night out you will remember forever. A very special show featuring all the hits of The Big O. This is the way it was in sound and vision tracing the atmosphere of the rise to prominence of one of the world's greatest Roy Orbison. Alan Morris, rated the UK & Europe's number one tribute to the Big O, brings to the stage an amazing performance that has met with critical acclaim from Theatre and Media, also former band members that toured with Roy and song writer Sammy King who wrote the song Penny Arcade saying this is the most wonderful tribute to Roy Orbison. A night out not to miss!!!

One thought on Roy Orbison With Al Morris