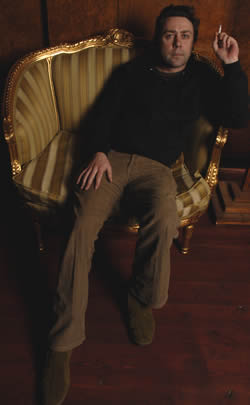 "High calibre comedy as it should be" ****Bruce Dessau, Evening Standard
At the age of 24, Sean became the youngest comedian ever to win the prestigious Perrier Comedy Award. Now aged 41, but "spiritually 11", he has enjoyed almost 2 decades at the top of the comedy tree.
The Sean Hughes National Tour is a long overdue return to the comedy circuit by one of the best stand-ups of his generation. He has retained his distinctly dark,explosive style, his quick-fire banter with the audience and "his piercing eye for the expectation-flipping one liner" (Evening Standard). More topical than tomorrow’s news, his twisted gaze can fall upon anything and everything, from dog death to his love of teenage indie pop. No two nights with Sean are ever the same – each one, an original and authenticated masterpiece, never to be seen again…
"A hugely impressive and intelligent comic… sometimes dark and always very entertaining" Time Out
As well as appearing in the 2002 film adaptation of Spike Milligan’s Puckoon, Sean has starred alongside Peter Davison in The Last Detective (ITV), used his edgy dry sense of humour to good effect as team captain BBC2’s Never Mind the Buzzcocks and shared a West End stage with Sienna Miller in As You Like It.
After so long away from his natural habitat Sean is returning to his first love…stand up comedy.

Suitable for adults only