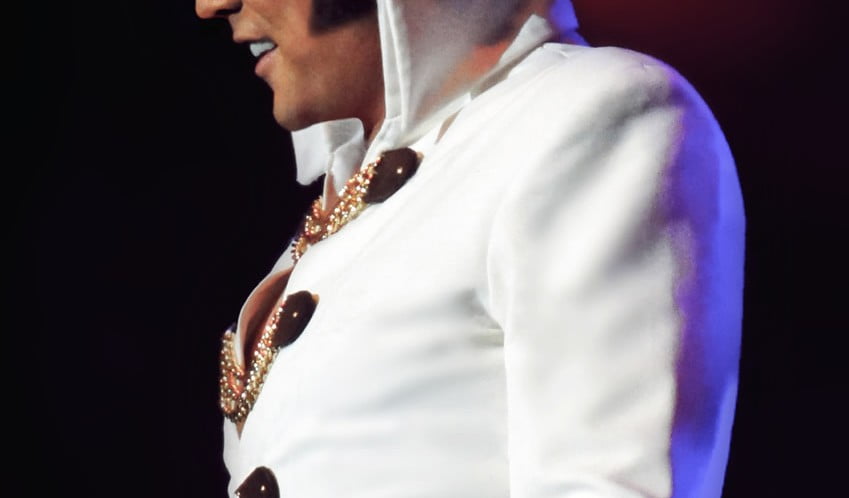 Due to a travel mix up, Shawn Klush – The Elvis World Tour has had to be postponed until MONDAY 12th OCTOBER

Direct from the USA, the world’s most successful Elvis tribute artist of all time returns to the UK by popular demand.

Featuring Elvis‘s original backing singers ‘The Sweet Inspirations’ who toured with Elvis from 1969-1977 and featured in concert movies That’s The way It Is, Elvis On Tour and TV special Aloha From Hawaii.

The incredible Shawn Klush first exploded onto the UK scene when 6 million viewers tuned in to see him crowned ‘The World’s Greatest Elvis’ live on BBC One. Soon after, Shawn was also crowned the first ever ‘Ultimate Elvis Tribute Artist Champion’ in Memphis, Tennessee.

On the back of his success, Shawn embarked on an unprecedented world tour, performing to thousands of fans in theatres and arenas across the USA, South America, Europe and Australia. He currently performs annually at the Hilton Hotel in Las Vegas on the very same stage that Elvis himself performed his record-breaking, live shows throughout the 70’s.

Don’t miss Shawn Klush on the UK leg of his 2015 World Tour… It simply doesn’t get any closer than this! Featuring a live band, orchestra and support.

Here are some reviews from Ticketmaster

Absolutely outstanding performance from Shawn Klush. So like Elvis it’s unreal.
The overall experience was superb. Second to none.
No overbearing security at the venue either so you could get close to the stage and to Shawn.
If you’ve never seen Shawn in action then you need to go and see him.
He’s brilliant.
Ben Thompson was a class act as a young Elvis too.
A show not to be missed!!!
Favourite moment: Getting my scarf from Shawn.
Opening act(s): Ben Thompson

What can i say apart from OMG, this show was and always will be no matter what, the best thing i have ever seen, i would reccomend this show to eveyone even if your not a massive elvis fan. I was to young to appreciate the real elvis and always wished id been older as his music and the man himself was amazing, but after seeing shawn klush i dont feel like ive missed anythig as to me shawn is my elvis. The man just has star quality oozing from evey pore, the venue was a sell out and the show second to none. Highly highly highly reccomended
Favourite moment: From walking up to the venue to the meet and greet at the end every moment was brilliant
Opening act(s): Ben thompson

Shawn Klush was brilliant felt like you were watching the real king. Facial expressions, movements and voice brilliant. Sang nearly all my favourites. Wouldn’t have missed it. The younger Elvis impersonator did not have the same charisma and there was to much reverb on the sound system. Sound quality was not good. People using mobile phones to film the show blocked your view. This should not be allowed. I paid the ticket entry price too and want to see the entertainer not their latest technology.
A NIGHT to remember Shawn. Thank you!
Favourite moment: Shawn singing American trilogy.

Oh what a night it was, it really was such a night!! We fell in love with Shawn Klush! How close can you get to Elvis? Well that was the closest we have felt after seeing a number of Eta’s. Shawn gave us the goosebumps with the feeling that it really was Elvis on stage! The whole atmosphere was amazing with incredible support from the band and of course the Sweet Inspirations. Ben Thompson opened the show and performed brilliantly as a younger Elvis, he certainly got us going. Can’t wait to see Shawn again so we are off to Glasgow on 1st October! The King lives through you all and us!!
Favourite moment: Intro and Entrance. Shawn and Sweet Inspirations ‘Amazing Grace’. In fact the whole show was our favourite moment!
Setlist: If I Can Dream, Suspicious Minds, American Trilogy, etc.
Opening act(s): Ben Thompson was amazing as a younger Elvis and trust he will continue for many years to keep the King alive.

The show, the cast, the audience and the venue made this an unforgettable occasion.
Both young and old Elvis’s were magnificent in their portrayal of the Worlds best entertainer.
Everyone enjoyed and sang along with most of the fantastic songs Elvis blessed us with. The Sweet Inspirations showed that they still love to be part of these Elvis shows and what great and powerful voices they still have to entertain the crowd.
Top marks for a brilliant night.
Favourite moment: When Shawn Klush sang My Way, American Trilogy and Steam roller Baby..amazing

The closest thing to the real deal you will see, pure class. Voice, looks, moves all studied & executed to perfection. A must see for any Elvis fan it doesn’t get any better. There’s a guy touring the UK thinks he’s Elvis….well he just might be!
Favourite moment: The beginning of part two
Opening act(s): Ben Thomson as a younger Elvis circa 1956 to 1968 – does a brilliant job and again has all the moves

Shawn Klush fantastic
Newcastle City Hall
– Newcastle Upon Tyne
– Fri 12 Jun 2015
Posted 15/06/2015
by bardenny
Absolute fantastic show, well worth all the hassle I had getting to the venue because im not from the area. Value for money, a 3 hour show, Shawn Klush you were fantastic, couldnt fault him and Ben Thomas (think thats right) was superb too. Great show.
Favourite moment: Seeing the place full, the atmosphere was electric, Elvis lives on through these superb acts the whole show was magical
Opening act(s): Ben Thomas, did the early Elvis was superb.