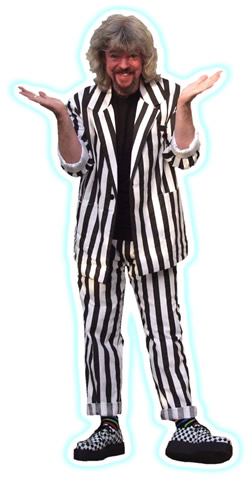 Billy Connolly can probably be described as Britain’s best loved comedian over the last thirty years.

But a problem for lovers of his stand up comedy performances is that extensive global TV and film demands for his services means that he plays to live audiences far too infrequently nowadays.

However you now have a chance to experience many of the finest moments of Billy’s comedy career through the brilliance of his leading exponent and tribute show – SILLY CONNOLLY.

Silly Connolly looks, talks, acts, sounds, and entertains just like Billy Connolly. And although you may believe you’re listening to a Glaswegian, you’d be mistaken. Amazingly, Silly Connolly is Irish!

SILLY CONNOLLY (a.k.a. Marty Byrne) is already an established artist and character on both sides of the border in Ireland, and became a household name there when he performed over 400 shows in a sponsored All-Ireland pub crawl and was interviewed by every single radio and TV station in Ireland, resulting in a best selling CD ‘Silly Connolly On Air’ and a string of sell out dates.

During his live show, he mixes classic Billy Connolly routines and observations with his own, and as a talented musician himself plays and sings all the favourite songs audiences always demand such as the ‘Welly Boot Song’ and ‘D.I.V.O.R.C.E.’ as well as hilarious self-penned songs performed in true Billy Connolly style.