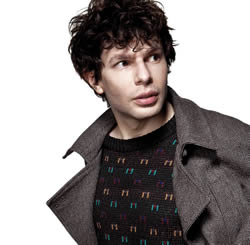 SIMON AMSTELL (+ Support) DO NOTHING

However before that, he will be performing stand up comedy in this theatre.

Please do not attend if the date clashes with something in your own life.

Thank you.
Goodbye
Simon Amstell made his name as the presenter of Popworld – Channel 4’s weekly pop programme. In his youth, Amstell was the youngest finalist of the BBC New Comedy Awards.
He started his presenting career at Nickelodeon and it didn’t take long for Nickelodeon to see his potential. Then came Popworld, which Simon co-hosted with Miquita Oliver from January 2000 until March 2006.
He is now the host of Never Mind The Buzzcocks.
Simon performs regularly on the stand-up circuit and has had sell-out shows at the Pleasance during the 2005 – 2007 Edinburgh Fringe Festivals. In 2008 he completed a national tour on theatres around the country.
Simon has won an RTS Award for his work on Never Mind the Buzzcocks as well as a Broadcast Award, two British Comedy Awards and was most recently nominated for a BAFTA.

****"One of the most elegant, articulate, sensitive and endearing proponents of ‘Soul Comedy" that there is"
Kate Copstick- The Scotsman

‘As close as you can get to a man emotionally and philosophically disembowelling himself on stage.’
The Sunday Times

‘Amstell shows off a more tender side and delves into his inner life to expose an unexpected sensitivity.’
The Guardian
‘Amstell … offers a probing, cerebral show… He speaks for a disconnected, disengaged chunk of Britain, sitting in their own trendily furnished boxes waiting for the world – or some meaningful cause – to come bursting through the door. It doesn’t.’
The Independent

SIMON AMSTELL DO NOTHING – Tickets

SIMON AMSTELL DO NOTHING – Comments

SIMON AMSTELL DO NOTHING – media

SIMON AMSTELL DO NOTHING – COVID Information