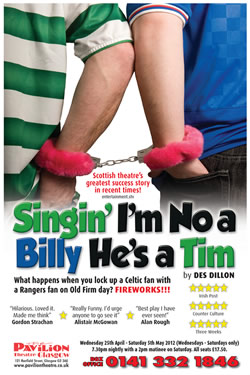 Contains strong language throughout the performance.

A play exploring bigotry and ethic identity. What happens when, on the day of the Old Firm Match, you lock a Celtic and Rangers fan in a cell together?  Fireworks.  And a weird kind of unity.

Des Dillon’s “Singin’ I’m No A Billy He’s A Tim”, puts sectarianism firmly in its place. Crowd pleasing look at the Old Firm divide makes for entertaining, high quality, populist theatre Des Dillon’s anti-sectarian comedy about two footie fans from either side of the Old Firm divide who are forced to confront each other’s point of view and culture, after being locked up in a cell together on derby day, is one of Scottish theatre’s most popular success stories of recent times.

And the show’s word of mouth popularity is more than richly deserved. First premiered at the Edinburgh Fringe in 2005  (where there was little expectation of a shelf-life beyond its initial run), since then this modest little three-hander has gone from playing to houses of 60 people, to an audience of 3,000 who have turned out at the SECC and five
national sell out tours in Scotland and Northern Ireland, garnering standing ovations and rave reviews wherever it plays.

Now Dillon’s plea for a little peace, love and understanding -or at least the ability to see further than the length of your own prejudices -finds itself hitching up at the Pavilion. And who could grudge its success? True you don’t have to be a rocket scientist to quickly work out that the initial hostility between Rangers fan Billy, and the Celtic supporting Tim (no one said the broad brush strokes employed here were subtle), would eventually lead to a “ceasefire” after the debunking of some common misperceptions of each other’s culture, and take on Scottishness.

Billy is proud to be “British”; Tim considers himself an “Irish-Scot”. But both in the end come under the umbrella of shared humanity, as the fate of turnkey Harry’s sick grandson hangs in the balance. As one character says early on:  “There’s more to fitba’ than fitba’.” The lesson learned during the course of the play  of course is that there’s a lot more to life than football. No matter the misplaced loyalty and bigotry that drives you on to support your team.

That rarest of beasts – theatre for people who normally wouldn’t normally be seen dead setting foot in the theatre – key to the show’s success is Dillon’s understanding that the best way to puncture bigotry of any kind is to laugh at it and point out its absurdities. Even if, in order to do so you have to show it in all its naked, knuckleheaded glory. Celtic’ fans are paranoid and workshy; Rangers fans bombastic bowler-hatted masons. Pumped full of comic brio (complete with sideswipes at alleged religious bias at Glasgow City council; Donald Findlay; and new, up- to-date gags surrounding Rangers bad boy Allan McGregor, and the recent controversy over Celtic’s taking to task of referees), Dillon’s sharp eye, and even sharper wit, makes his allegory and argument for tolerance apply far beyond “Scotland’s shame.” The end result is a crowd pleasing show, ringing with truth and authenticity, as much as laughter, at every turn. One deserving of every success it enjoys.

We are delighted that our new production of Singin I’m No a Billy He’s a Tim is getting such rave reviews at Edinburgh Fringe 2011Gordon Strachan(ex Celtic Manager) saw the show on Wednesday 10th Aug 2011 and this is what he said:****Hilarious. Loved it. It made me think. Gordon Strachan****

Wednesday 25th April – Saturday 5th May 2012 Wednesday – Saturday Only at 7.30pm nightly with a 2pm matinee on Saturday.

Singin’ I’m No A Billy He’s A Tim – Comments

3 thoughts on Singin' I'm No A Billy He's A Tim