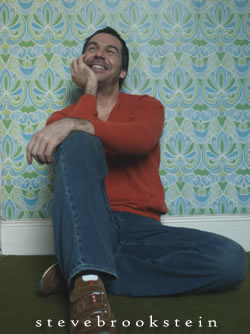 Steve Brookstein is touring with his 8 piece live band for the first time since winning The X Factor with a staggering 6 million votes. The tour will debut his new single ‘Fighting Butterflies‘, (released 18th Sept) and ‘Then There Were None‘ taken from his forthcoming new album "40,000 things‘.

You will also hear outstanding renditions of classics such as ‘Smile‘ and ‘Won’t Last Another Day Without You‘, his No. 1 single ‘Against All Odds‘ and tracks from his No. 1 album ‘Heart and Soul‘. Steve’s soulful musical repertoire also includes songs such as ‘Ya Mo Be There‘ as well as a tribute to one of Steve’s biggest influences, the soul legend, Luther Vandross.

Steve is supported by Eileen Hunter singing songs from ‘Now and Then‘ the most exciting jazz album of the year with its individual take on well-known standards and captivating original songs, also written by Steve himself.

A truly amazing evening for both soul and jazz lovers.

One thought on Steve Brookstein with EiLEEN HUNTER