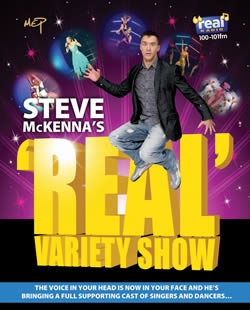 Due to contractual difficulties, the Steve McKenna Real Variety Show has now been cancelled. Please return your tickets to the Box Office for a full refund. We apologise for any inconvenience or disappointment this may cause.

Steve McKenna, best known as Real Radio’s drive time presenter on one of the biggest radio shows in the UK, is now live on stage in an unmissable variety show, packed full of laughter, music and comedy, letting you see Steve as you’ve never seen him before…

“The voice in your head is now in your face and he’s bringing a full supporting cast of singers and dancers!”

This action packed, fast paced energetic modern variety show – will have you roaring with laughter, singing along and dancing in the aisles as Steve, with his full supporting cast of singers and dancers, entertain you with the best variety of hits from the past few decades, together with hilarious comedy sketches and routines…Oh!!!… And one or two surprises along the way!

Steve McKenna is a Sony Award winning journalist and presenter with well over a decade’s experience under his belt. His television work has encompassed every major terrestrial and digital channel. Steve has also worked on Radio 1 and 2 whilst also reporting for BBC1 News, BBC3 and Radio 5. He’s also written for various publications including NME, The Guardian and completed a two year stint as a columnist for the Daily Record.

Steve’s wit has led to successful comedy writing for Radio 2 and 4 whilst his expertise in the entertainment industry has taken him around the world: The Oscars, Cuba’s first rock gig, numerous festivals throughout Europe, various events in NY and even half way up a mountain in Switzerland. He has a doctorate in metaphysics, his father’s a retired private detective and his mother’s a faith healer ……his interests are extensive, his knowledge is frightening and his experience is enormous.

Steve McKenna, with a full supporting company, in a ‘Real’ cracker of a show… Definitely not to be missed!