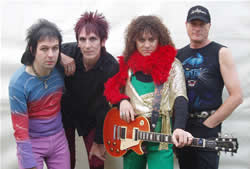 T.Rextasy are the only band to have been authorised and endorsed by Marc Bolan’s Catalogue Management, and are now officially recognised as the World’s No. 1 group dedicated to the greatest Glam Rocker of all – Marc Bolan of T.Rex. With their uncanny doppelganger lead singer and guitarist, Danielz, T.Rextasy perform a powerful and mesmerising presentation of Marc BoIan’s rock and pop anthems.

With a career spanning over 16 years, T.Rextasy have toured Worldwide, including Japan, Germany, Denmark, Abu Dhabi, Sweden, and Marrakech, to name a few. They have not only performed with Bolan’s contemporaries such as Roy Wood (Wizzard), Steve Harley (Cockney Rebel), lan Hunter (Mott The Hoople), and Slade, but they have played more than once at the impressive Wembley Arena in London, and headlined the gigantic Ariake Coliseum in Tokyo.

T.Rextasy are also the only band to have the blessing and support from Marc’s own family and ex-T.Rex members, including June Bolan (Marc’s wife), Gloria Jones (Marc’s girlfriend), Rolan Bolan (Marc’s son), Mickey Finn (TRex conga player), Tony Visconti (T.Rex producer), and others. They were also voted ‘The Best Live Tribute Band in the UK’ on the BBC1 programme ‘Battle of the Fantasy Bands’.

In September 2007 T.Rextasy played to 40,000 at BBC Proms Night in London’s Hyde Park, before headlining at the Shepherds Bush Empire in London where special guests appeared alongside them, including Marc Almond (Soft Cell), Gloria Jones, Shakin’ Stevens, Tony Visconti, Clem Burke (Blondie drummer), and a host of others. A DVD of the concert was officially released in September 2008 by Liberation Entertainments.

T.Rextasy are the only band in their category to have obtained a three album and double single deal that saw their albums released on Madman Records in the UK and Europe, and Columbia Records in Japan and the Far East. In November 2008, T.Rextasy released their first Christmas single on Madman Records entitled ‘White Christmas’ on red vinyl and CD formats.

"When I saw Danielz on stage, a shiver went up my spine. lf there is anyone who can step into Marc’s shoes, I’d like it to be him."
JUNE BOLAN (Marc’s Wife)

"T.Rextasy are a great tribute to my Dad and do a fantastic job — they have my support 100%."
ROLAN BOLAN (Marc’s Son)

"They’re a credit to Marc and I’m sure he would approve. He’s probably up there with a smile on his face right now!"
HARRY FELD (Marc’s Brother)

"They’re the closest you’re ever gonna get to the real thing."
BILL LEGEND (T.Rex Drummer)

"These guys are so much more than just a regular tribute band."
DINO DINES (T.Rex keyboard player)

"T.Rextasy have my utmost support and I wish them weIl."
GLORIA JONES (Marc’s Girlfriend)

"They are the best tribute to Marc in the World. Danielz has got the look and sound exactly right. He’s even the same height as Marc!"
TONY VISCONTI (T.Rex producer)