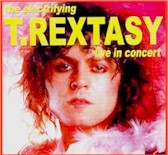 T.Rextasy are still recognised as one of the highest acclaimed tribute bands on the scene today, and are currently into their 9th successful year.

Playing completely live, T.Rextasy rock ‘n’ roll with a wealth of Bolan’s hits that include ‘Jeepster’, ‘Telegram Sam’, ‘Ride A White Swan’, ‘Get It On’, ‘Metal Guru’, ‘I Love to Boogie’, ‘Hot Love’, ‘20th Century Boy’ and many others.