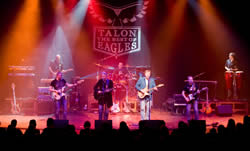 Lyin’ Eyes, Desperado, Take It To The Limit, Life In The Fast Lane,Take It Easy, New Kid In Town, The Last Resort, Hotel California, Witchy Woman, Heartache Tonight……The hits go on and on. Each evoking memories from a time in musical history that because of its quality still stands strong today.

Now in their twelfth year together, Talon are set to bring you the most exciting Eagles music show yet. Featuring all the Eagles Classics we grew up with, plus solo tracks from Messrs Henley, Frey and Walsh and also brings to the fore new Eagles material from the long awaited new album which is sure to spawn a list of hits over the following years.

The last time the Eagles released an original album, most musicians on today’s Top 40 list weren’t even born yet. The fact that the band could take a 28-year break before releasing their seventh album, Long Road Out of Eden, is simply a tribute to how enduring their music is.

In what promises to be Talon’s biggest and best show yet, Talon have repeatedly year after year taken their stunning recreation of the complex melodies and superb vocal harmonies of the Eagles to deliver a concert to remember.

Talon are giving the Eagles a run for their money. Rockphiles.com

Its easy to see why Talon keep moving from strength to strength … Behind the illusion of making look easy is a dedication that is second to none. Talon have a passion for the music they’re playing and performing. When you find such a creative formula on stage…. It usually moves live performance from another level. Talon take you to this level repeatedly. RFM.

When it comes to recreating the unique sounds of the Eagles, Talon are unequalled. Classic Gold Radio

Talon – The Best of The Eagles – Tickets

Talon – The Best of The Eagles – Comments

Talon – The Best of The Eagles – media

Talon – The Best of The Eagles – COVID Information