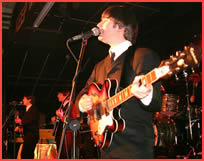 Since their inception, BackBeat has become one of the country’s hottest entertainment tribute acts. With the absolutely uncanny resemblance to the Beatles and as fantastic sound-a-likes, their tribute is unlike any other!

BackBeat recreates the energy, excitement and fun of the Fab Four that has proven to win over any cynic or the most discriminating Beatles fan. Proof is in the immense popularity seen in Southern California’s British Night Pubs where the band has been extremely well received by native Brits. Their shows have been attended by Beatle fans from all over the world!