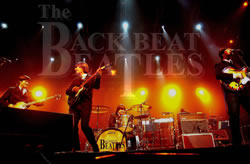 The Backbeat Beatles have an incredibly realistic sound, impeccable pedigree and are the ONLY band to truly recreate the Beatle’s experience.

Hundreds of performances around the world combined with collaborative efforts with the likes of the Liverpool Royal Philharmonic Orchestra have helped seal their reputation as simply THE best Beatles band around.
The lads have the personalities and the stage presence to take The Beatles story from it’s early Cavern Club days, right through to the Apple era with the tunes and the costumes to match.

The band’s lively onstage wit and skilful, musicianship help them to not simply imitate The Beatles music, but their banter and personality. This leads to an experience, which is the closest today’s fab four fans can get to those halcyon days.

This is the one Beatles Tribute you won’t want to miss!

One thought on The Backbeat Beatles