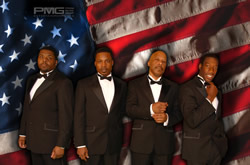 The Drifters in Concert*

In celebration of the group’s 55th anniversary and the release of the first official new album in 30 years, The Drifters are back on tour in the UK with an exciting new show.

As one of the biggest selling bands of all time, The Drifters have collated a huge catalogue of over 50 hits, selling in excess of 214 million singles and 114 million albums across the world.

Since their creation, the line up of The Drifters has undergone many changes with more than 55 different singers, including icons such as Clyde McPhatter, Ben E King, Charlie Thomas, Rudy Lewis and Johnny Moore.

Tonight’s energetic show features the only legitimate Drifters line up in the world, performing timeless classics such as ‘Saturday Night at the Movies,’ ‘Under The Boardwalk,’ ‘Come On Over To My Place’ and ‘Kissing In The Back Row of the Movies’ as well as a whole host of new material from the stunning new album entitled ‘Five Decades and Moore.’

‘Drifters Legend’ Butch Leake flies into the UK this week and will join The Drifters live on stage at selected shows on the Sacrifice Tour as a special guest – in celebration of the group’s 55th anniversary. During his time as a second tenor and baritone with The Drifters in the 1970’s, Butch helped record the memorable hits ‘Down on the Beach Tonight’, ‘Kissing in the Back Row of the Movies’, ‘Love Games’ and ‘There Goes My First Love’ which topped the British and European charts in the early seventies.
Butch will join The Drifters as a special guest live on
stage at Cliffs Pavilion, Southend, Whiterock Theatre Hastings and Pavilion Theatre, Glasgow.

One thought on The Drifters