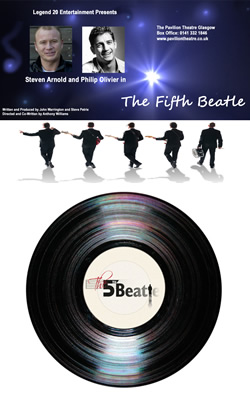 Steven Arnold and Philip Olivier in The Fifth Beatle.

THESE SHOWS HAVE BEEN CANCELLED

The Fifth Beatle is a brilliant new stage show that looks back at the 1960s and charts the meteoric rise to fame of the biggest stars of the decade – The Beatles and George Best.

The show contains some of the most popular songs of the era, and takes you back to a time when youth culture was born and a new type of hero was bred. Poignant, yet funny and entertaining, The Fifth Beatle follows Anna – a 1960s wild child and groupie, on a magical mystery tour of self-discovery.

Written and produced by John Warrington and Steve Petrie and directed and co-written by Anthony Williams, Steven Arnold from Coronation Street and Philip Olivier who found fame in Brookside have joined the cast of the show. With plenty of hits from the 1960’s to get you on your feet, as well as a number of new songs which have been written for the show by Ricky Warwick (Thin Lizzy) and Vic Flick who performed the James Bond theme tune for Dr No, The Fifth Beatle is an emotional roller-coaster which promises to leave audiences laughing and crying as well as dancing in the aisles.

Be prepared to laugh, cry & rock n’ roll in this brilliant new production. It’s more than just a show; it’s a way of life!

THESE SHOWS HAVE BEEN CANCELLED