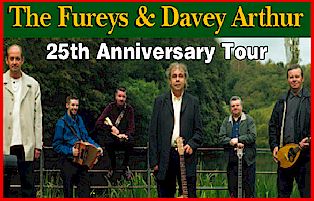 The Fureys are responsible for some of the most stirring music ever to capture the public imagination. Their folk based music has received standing ovations in some of the biggest concert halls of the world.

They were reunited with their lifetime friend and former band member Davey Arthur. For George, Eddie and Davey, there was also a touch of sadness as they are without Paul who died in June 2002.