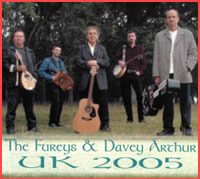 The Fureys celebrated their 25th anniversary in 2003 with a series of concerts throughout Europe, the UK, Australia, New Zealand, the USA and Canada. They were reunited on these concerts with their lifetime friend and former member Davey Arthur.

Due to the huge success of their anniversary tour Davey has stayed on with the Fureys on a permanent basis and will be with the lads on this tour.