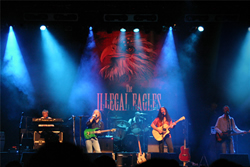 John Hessenthaler for OEP by arrangement with HCO & IE presents

Direct from the California & New York THE ILLEGAL EAGLES Hit the UK as part of their massive 2008 world tour. A full evening show featuring all the classic Eagles songs delivered in full EAGLES sound and vision. If you missed THE EAGLES recent stadium tour dates -don’t worry its all here in ‘the fast lane!’

The Independent Newspaper Review .Angie Elliott
Saturday 5th April 2008. The Embassy Theatre. Skegness.
Another Saturday night, another tribute band. Yet such a thought does the Illegal Eagles a serious disservice. Five unassuming middle-aged men in jeans and white shirts sauntered on stage to the strains of “The Return of the Sorceror”, the familiar theme from The Hitchhiker’s Guide to the Galaxy. They picked up their instruments and kicked off with an easygoing “Seven Bridges Road”, smoothly followed by the old country favourite “Take It Easy”. Accomplished and proficient players all, and with a beautiful and pitch-perfect new singer, the band worked their way through all the crowd-pleasers, including tracks from the recent album, Long Road Out of Eden.
Chris Atack’s tricksy guitar playing was mesmerising: his fingers worked their way through the classic riffs and solos with effortless dexterity. Meanwhile, Chris Childs played the bass with such brilliant nonchalance that the instrument appeared to be a part of his body.
Four songs in, we were treated to a rendition of “Doolin-Dalton” – the cowboy track from the album Desperado – on which Danny Vaughn, the new lead singer, played haunting harmonica. Another highlight was Don Henley’s “Heart of the Matter”, beautifully sung with such soulful precision that the temperature rose in the theatre. The Eagles’ famous harmonies, especially on “Take It to the Limit”, were sublimely replicated – no mean feat, as anyone who has attempted them at a karaoke night can testify.
A nice touch in the middle of the second half had the boys debating which instrument had provided the best song intro; thus we were played snatches of “Smoke on the Water”, “Livin’ on a Prayer”, “We Will Rock You” and “Jump” before Jeff “Wildman” Green came on with a double-necked guitar and played the famous opening bars of “Hotel California” to the delight of the audience. This segued into “Boys of Summer” and everyone in the theatre rose and surged forward, encouraged by the band, who told us that we had been “sitting politely for too long”. Joe Walsh’s stormy “Rocky Mountain Way” and a surprising “The Last Resort” rounded off the second half.
A standing ovation demanded the band’s return, and we were rewarded with “Heartache Tonight” and “Life in the Fast Lane”, which was ringing in our ears as we filtered out. The three other members of my party had been to see the Eagles the week before, but they were not disappointed with this evening. They walked out into the bracing air with big smiles and considerably heavier wallets than they had on exiting the O2 Arena in London.

One thought on The Illegal Eagles