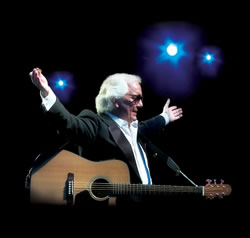 If you saw the film ‘Walk the Line’ then you will not want to miss this fantastic show!

Since appearing on BBC television at the age of 14 singing ‘The Tennessee Flat Top Box’, Roger Dean has been playing Cash’s music most of his life.

Along with his band the ‘Lazy Boys’ he will keep you spellbound with his knowledge of the country music legend. Between singing classic numbers such as Big River, Ring of Fire, I Walk the Line, Sunday Morning Coming Down and Hurt, Dean describes Johnny’s rise from poverty stricken beginnings in rural Arkansas to world stardom.

Roger Dean perfectly captures the spirit of Johnny Cash. The legend’s music is in safe hands so book early for a musical journey you will not want to miss.

“Tenderness and fun, style and verve…. And oh, what songs!”