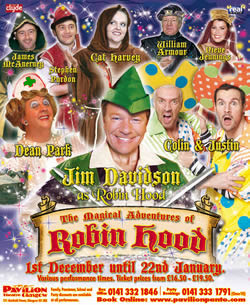 ‘The Magical Adventures of Robin Hood'

Following the huge success of last year's pantomime, we
return with a BIGGER and BETTER Brand New Production and a Fantastic All Star
Cast. Starring in his first ever Scottish Family panto is the Hilarious Jim
Davidson as Robin Hood, ably assisted by his Merry Men Colin & Justin fresh
from the Jungle to the Forest…Dean Park as Nurse Ima Poltis will have you in
"Stitches" with her comedy antics! Getting "Stuck" into the role of Friar
(Nip'n) Tuck is Real Radio favourite Cat Harvey. To help Robin on his adventures
we have Stephen Purdon as Will Scarlet and James McAnerney as the BIG loveable
character Little John, Nieve Jennings plays Maid Marion and not forgetting the
traditional panto Baddie The Sheriff of Nottingham is played by Billy Armour
who tries hard to stop Robin ‘Nick, Nick Nicking' from the Rich to give to the
Poor.  With a full supporting cast this
production will really "Hit the Target!"

With a Brand New Script, New Stage Sets and Stunning New
Costumes this is sure to be the Best Affordable Family Panto in Town.

With generous discounts and concessions at all performances
and great Family Value Tickets on selected dates.

It's the FAMILY PANTO for all ages in true Pavilion style.

So AIM YOUR SIGHTS HIGH this Christmas and book early to
avoid the rush.  Call our Box Office NOW
on 0141 332 1846 or book online at pavilionpanto.com

The final two performances are now SOLD OUT!

169 thoughts on The Magical Adventures of Robin Hood