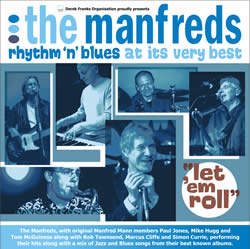 If there’s one band whose individual musical accomplishments have over the years gone from strength to strength, and yet who can encapsulate and keep alive the golden age of British popular music, then it has to be The Manfreds. With their early roots in jazz and R & B, the calibre of these performers was always higher than their acquired pop status might indicate, but they still certainly knew how to produce a hit or six – in fact 15 UK Top 20 singles, 3 of them number ones (the shortest duration being 11 weeks). And after The Beatles and The Animals, they were the third band in the history of English rock to reach a number one position in America.

The band disbanded in 1969 but after not having played their hits together for nearly a quarter of a century, an enjoyable reunion in 1991 found everything falling back into place and with a dynamic new freshness that enhances their many chart successes. Their live gigs burst with that quirky mix of solid gold pop, jazz and rhythm & blues which was always their trade mark …. add in a generous helping of showmanship and charisma and the result is a show as pleasing to the ears & eyes as it ever was.

So, look back if you must, but know that The Manfreds are right here, right now. Great music goes on forever.