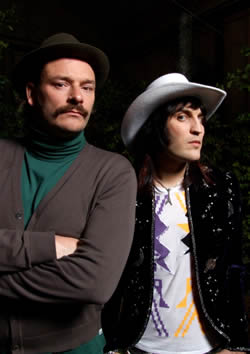 Following the sell out success of their debut live tour, “the funniest comedy double-act in Britain,” (NME) Noel Fielding and Julian Barratt, return to the live stage with their heady brew of music and comedy. Vince Noir and Howard Moon will be joined on stage by a host of characters from their hit TV show. See Naboo the Enigma and his cape of wonder. Bollo; the ape that dreamt he was a man. Discover what mysteries lurk in the Hitcher’s hat. Marvel at the Moon as he soothes with his idiot wisdom. Expect punks and yetis, and monsters with elbow patches, in a psychedelic meteorite of music and mayhem.

“A triumphant spectacle… One of the most joyful shows around.”
The Observer