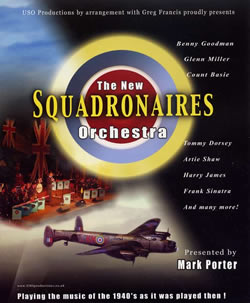 Do you remember the original  ‘Squadronaires’ from the 1940’s?  Officially known as the No 1 RAF Dance Band, the musicians soon adopted the unofficial name ‘The Squadronaires’ and went on to win the prestigious ‘Melody Maker’ award for 5 consecutive years !

Originally formed by the RAF with a view to emulating the popularity with the troops of the American bands of the day, and to help boost morale, the Squadronaires went on to surpass even the most popular of the American bands. At the termination of the war in 1945, the orchestra went on to play at the Villa Marina in the Isle of Man for eleven years, until the advent of ‘pop’ music. The name ‘Squadronaires’ belonged to the leader Ronnie Aldrich and in fact never belonged to the Royal Air Force. After Ronnie Aldrich passed away, the new Squadronaires was reformed under saxophonist Harry Bence and continued to perform until his death in 1997.

The orchestra was once again reformed under the leadership of Trumpet player Greg Francis (the bandleader of the Memphis Belle Swing Orchestra and the movie Memphis Belle) and a change of presentation and musical content was made, with the approval of Ronnie Aldrich’s widow
Mary Aldrich.

So … we now introduce to you the New Squadronaires Orchestra. Based on – and as a tribute to  the original wartime orchestra, the band consists of young musicians as they looked then –
no long hair, beards or earrings – playing the SWING music of the era as it was played then !
All the musicians are dressed in  RAF uniform and the visual appearance of this fabulous orchestra is enhanced with the backdrop of a 16’ x 8’ RAF ensign, together with the RAF style band desks.

Playing the music of the great Swing Bands including Glenn Miller Tommy Dorsey Harry James
Benny Goodman Artie Shaw and others, the program of music includes some of the original Squadronaires music arrangements which have been transcribed by orchestrator Greg Francis, and which have not been played since 1964. Ronnie Aldrich put all of the original music parts on a bonfire at the beginning of the pop group era, and after the taste in popular music changed to that of the Beatles and other similar beat groups. The  and some really smooth vocals from bandleader,.

A popular feature of any Squadronaires Orchestra dance was the ‘Squadcats’ and the orchestra features it’s own version of the small group playing the ‘Dixieland’ music so popular with the fans. The present day bandleader is ex Syd Lawrence Orchestra vocalist Mark Porter, who sings some really smooth vocals along the way.