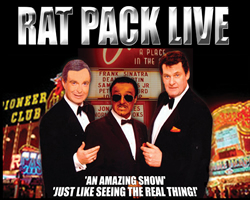 They were the definition of cool during their Fifties and Sixties Vegas hey day – Frank Sinatra, Dean Martin and Sammy Davis Jnr.
Combining the full sound of big band swing with charisma, panache and swagger, the trio – collectively known as the Rat Pack – had attitude to spare. The rebel rousing legend that is Frank, Dean and Sammy remains unmatched to this day.

Frank Sinatra is played by David Alacey – "Britain’s answer to Harry Connick Jnr" according to Michael Barrymore. The Times describes him as "a stylish crooner", the Stage "ultra hip. . . wraps the evening in elegant chic" and Las Vegas legend Buddy Greco was moved to say "this guy really is Sinatra".

The UK’s number one tribute to Dean Martin, Harry Crawley, lives the dream – having played the famous Caesar’s Palace Ballroom in Las Vegas with a full big band.

The similarity of Rahul d’Mello to Sammy Davis Jnr isn’t confined to stunningly lifelike vocals. Sammy had a South American mother, Rahul has a South American father. Also, just like Sammy, Rahul is as adept on the drums as he is on vocals.

Fascination in the musical phenomenon created by Frank Sinatra, Dean Martin and Sammy Davis has created a massive revival of interest in the Rat Pack.

The Rat Pack Live is the UK’s longest-running tribute to Frank, Dean and Sammy and is backed by a fully live band.

Prepare to experience the definition of cool…