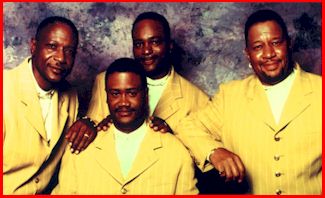 The Stylistics are the ultimate in showmanship, harmony and style. One of the smoothest and sweetest soul groups of their era – collectively they are one of the best-loved and longest-lasting R&B groups to date.

They performed their greatest hits including ‘Betcha By Golly Wow’, ‘You’re My Everything’, ‘I’m Stone in Love With You’, ‘Break Up To Make Up’ and of course the Grammy nominated ‘You Make Me Feel Brand New’

Why not visit the official Stylistics web site now?
www.delafont.com/music_acts/Stylistics.htm

Following the success of the O’Jays, The Spinner’s and The Delfonics, the City of Brotherly Love had just enough room for another highly successful soul group. That group came in the form of The Stylistics. The Stylistics, with their charisma, style and harmony, evolved into one of the best-selling soul groups ever, as the Philadelphia based quartet recorded a remarkable 10 straight top-ten hits during the early 1970’s.

The story of The Stylistics is not only one of success, it is one of early disappointment that eventually led to their meteoric rise. When The Monarchs and The Percussions, two moderately successful Philadelphia high school bands dissolved in the late 1960’s, it set the stage for a merger that would impact soul music for years. In 1968, under the suggestion of a teacher, the two disbanded high school groups decided to join forces. Russell Thompkins Jr., Airrion Love and James Smith of The Monarchs, joined forces with James Dunn and Herbert Murrell of The Percussions, it was then that The Stylistics were born.

In 1971, the group collaborated with producer Thom Bell, the ingenious creator of the “Philly Sound” to release their debut self-titled album. The Stylistics would capture the imagination of the nation and the hearts of its women with their first single, “You’re a Big Girl Now”, which immediately became a top-ten hit. The Stylistics had started a trend. It was the broad falsetto of lead vocalist Thompkins Jr., a voice unlike any of his contemporaries or predecessors that appealed to the masses. With his style and delivery, fans and artists alike were mesmerised.

Under the production of Bell, The Stylistics went on to produce 12 consecutive top-ten hits from 1971 to 1974, culminating with their Grammy-Nominated hit, “You Make Me Feel Brand New”. It seemed every song the quintet released, greeted the airwaves with fresh, artistic fervor. Their emphasis on smoother, sweeter ballads made them the antithesis of many of their popular contemporaries. Their tempo and style would vary effortlessly with each song. The Stylistics had carved themselves a reputation as perhaps the premier soul group during that span.

They released their first album under Bell, “Heavy”, in 1974, but their popularity would not end there. Their 1975 release, “The Best of The Stylistics”, eventually earned double-platinum honours, making it their highest selling album ever.

As the years following their Bell/Creed collaboration passed and their production underwent a facelift, The Stylistics would undergo even more changes when Dunn and Smith left the group in the early 80’s. Still, they persevered, replacing the duo with Van Fields and Harold Brown.

As they evolved The Stylistics would appeal to a more mature audience while maintaining global popularity. The release of their “Stylistics Christmas”, album kicked off their 25th Anniversary World Tour. The Stylistics toured South Africa in 1996, playing in front of a crowd of 35,000 at Johannesburg Stadium. They began another World Tour in November 2000 in England, which stormed into Singapore and finished off in Honk Kong on New Years Eve. The Stylistics also continued to tour with the 70’s Soul Jam Tour, which plays to sold-out crowds across the nation.

With their 1996 release of “Love Talk”, The Stylistics proved themselves to be a pillar of longevity in a genre rife with “one-hit wonders” and break ups. All together, The Stylistics appeared on over 40 albums, including compilations.

What started as the innocent union of two ex-high school bands, developed into one of the longest standing, most accomplished soul bands to grace the R&B scene. They continue to perform as only they can, bringing with them the sweet, soulful memories of year’s past.

One thought on THE STYLISTICS