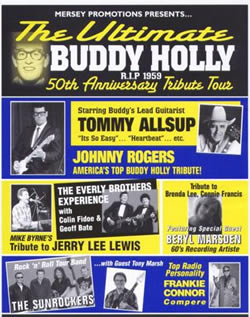 Due to circumstances out with the control of the theatre, both ‘An Evening with Peter Grant’ & ‘The Ultimate Buddy Holly Show’ have been cancelled.

Customers should return their tickets to the Box Office, along with their credit / debit card where appropriate, for a full refund. Tickets for Peter Grant must be returned by Friday 3rd April 2009 & Buddy Holly tickets must be returned by Thursday 18th June 2009. We apologise for any disappointment that this may cause.

At approximately 1.00am on the morning of 3rd feb 1959, Buddy Holly died in a plane crash near Clear Lake, Iowa, and the legend that was his legacy was born.

Tommy Allsup is an integral part of that legend having helped create, with his distinctive guitar playing, the unique sound associated with Buddy Holly’s music. Indeed only two hours before the fatal crash Tommy had been on stage with Buddy as lead guitarist of his band, The Crickets, thrilling the crowd at the world famous Surf Ballroom. Buddy had chartered the light plane to take himself and his two band members on to their next venue instead of using the unreliable and bitterly cold tour bus, but the other two headliners on the tour, Richie Valens and J.P.Richardson (The Big Bopper), also wanted to make the flight. The Bopper persuaded Buddy’s bass player, a young Waylon Jennings, to swap places with him and Richie Valens pestered Tommy Allsup until Tommy eventually agreed to flip a coin for the seat. Richie called heads and won the toss, taking Tommy’s place on the plane. Richie Valens died-Tommy Allsup survived.

Tommy first became a "Cricket" after playing as studio session guitarist on many of Buddy’s hits including "It’s So Easy", "Heartbeat", "Wishing" etc. etc. After Buddy’s death he went back to session guitar work and eventually became a record producer for Liberty Records in California, working with such artists as Bobby Vee, Johnny Burnette, Vickie Carr and the great Willie Nelson. Tommy is credited with playing on over 6,500 recording sessions and is considered by a host of top stars, including Paul McCartney, to be one of the worlds’ top guitarists. Now aged 76, he lives in Azle, Texas where he is still working as a record producer as well as touring the U.S. promoting his music.

Tommy Allsup came to Liverpool in March 2008 to appear at a sell-out charity concert to commemorate the 50th anniversary of Buddy Holly’s U.K. appearance at the famous Philharmonic Hall in the city. He brought with him Johnny Rogers who is considered to be America’s top Buddy Holly tribute act as endorsed by Buddy’s brother, Larry, who is quoted as saying "Johnny is the nearest thing to my brother that I have seen"

Johnny is from Chicago and is a life-long Buddy Holly fan, bearing an uncanny resemblance to his hero, sounding remarkably like him in both his singing and his amazing guitar playing. Johnny sings all the Buddy Holly hits including even the very obscure recordings, which both delights the Holly fans and sets him apart from other Buddy Holly tribute acts.

The rapturous reception given to Tommy and Johnny at the Liverpool Philharmonic Hall together with other related appearances in the North-West during their short stay has been the catalyst for them to return to the U.K. in 2009, the 50th anniversary of Buddy Holly’s death and that fateful flip of a coin, to embark upon and headline a national theatre tour.

This tour will be the ultimate "Tribute" tour with the first half of the show, compered by top radio personality Frankie Connor, featuring artistes performing the music of the Everly Brothers, Brenda Lee, Jerry Lee Lewis, Connie Francis, Roy Orbison and Duane Eddy. The second half of the show will be entirely dedicated to Tommy Allsup and Johnny Rogers’ tribute to ""The Late Great Buddy Holly"

The breaking news is that the above production has been booked to entertain the new President of The United States, BARACK OBAMA, at his inauguration ball on January 20th 2009.