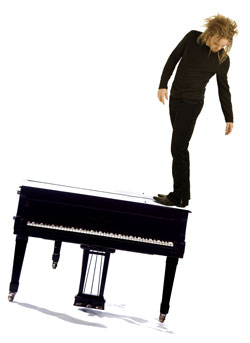 In London, they reckon he’s the “Next big thing in musical comedy” (Time Out) and “The best musical comedian since Bill Bailey” (The Times)
In Melbourne, they say he’s “Witty, smart and unabashedly offensive” (The Age)
In New York, they call him “Dazzlingly daffy… so refreshing” (NY Times)
In Scotland, they say he’s “An extraordinary performer“. (The Scotsman)
In Norway, they say “Tim Minchin er noe av det morsomste jeg har sett noen gang.” (Stavanger)

After a sold out UK tour last Autumn, uberminstrel Tim Minchin lugs his piano back out on the road to give those poor souls who missed out another chance to see his biting and brilliant show.
Back from a massive Australian tour, Tim wants to know if you are Ready For This, without really specifying what this is.