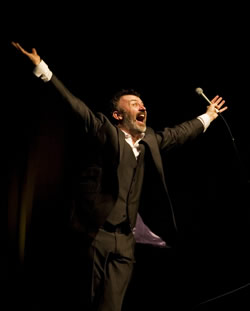 TOMMY TIERNAN is a legend in his home country of Ireland and that reputation is fast gathering momentum here in the UK following on from last years UK tour (Crooked
Man) and several high-profile TV and radio appearances, including LIVE AT THE APOLLO and MICHAEL MCINTYRE’S COMEDY ROADSHOW.

TOMMY’S mastery of stand-up allows him to take risks other comedians dare not. Through hilarious story telling and a high energy, non- apologetic delivery he continually challenging his audience who can be confident they are in safe hands. To see TIERNAN live is a rare treat, as his stories unfold and themes are elaborated his performance mesmerises
as his lyrical way with words make you laugh harder than you’d ever believe possible.

Presented by Mick Perrin for
Just for Laughs Live

Tommy Tiernan will be appearing, along with Ross Noble and Eddie Izzard, on Laughs in the Park on BBC 2 on Sat 29th October at 10.25pm.