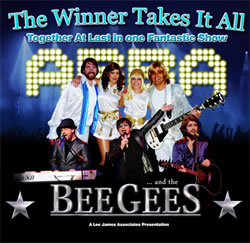 ACT I
The Bee Gees – Live In Concert

Dig out those flares and prepare to strut your stuff as ACT I recreates to perfection the extensive Gibb Brother’s repertoire with a full live band. Get ready to sing and dance to such disco classic as Stayin’Alive, Night Fever, More Than a Woman and Tragedy as well as the older hits such as Massachusetts and Words.

With an on-stage ensemble that is fronted by the stunningly convincing vocals of Brothers Darren and Gary Simmons as Barry and Robin Gibb, as well as Jarrod Loughlin as Maurice Gibb, these three leading men collectively have career highs including performing live with the Bee Gees themselves.

Having spent many years fronting the UK’s number one Bee Gees Tribute Theatre Show (Jive Talkin’), you can rest assured that the stunning harmonies and haunting melodies of the Bee Gees will be brought to life with such authenticity, that it has to be heard to be truly believed. Never before has there been a more complete Bee Gees experience.

Now boasting a 9 piece ensemble and some of the country’s most talented young musicians, prepare for a non-stop barrage of adrenaline filled hits made famous by ABBA themselves and the cultural phenomena that is Mamma Mia – The Movie.

With the release of Mamma Mia the ABBA music has yet again been opened up to new generations of young eager fans ready to dance and sing all night long to the likes of Dancing Queen, Waterloo, Take a Chance, Fernando and many more. To provide that evening of ABBA bliss, we present to you Act II of the ‘The Winner Takes It All’ as they perform as ABBA-Live in Concert.

The Winner Takes It All is the perfect union of two of the country’s most established and supported theatre shows.

You will not be disappointed.
FIND TICKETS

Winner Takes It All – Tickets

Winner Takes It All – Comments

Winner Takes It All – media

Winner Takes It All – COVID Information